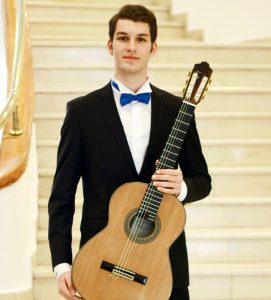 At the 2020 Florida Guitar Foundation Competition, held online August 23–September 12, Faculty of Music and Performing Arts undergraduate student Özberk Miraç Sarıgül took first place in the intermediate (under 25) division. The competition is normally held in the US state of Florida during the spring, but was delayed until late summer due to the pandemic.

The event attracted competitors from 26 countries. In the online format used this year, each guitarist first submitted a newly recorded, unedited video of a live performance. An elimination round then resulted in the selection of 10 musicians in each division for the final round, which was streamed on the internet. Miraç, the youngest competitor in his division, was chosen by the jury as the winner.

The 2019–2020 season was a very successful one for the young guitarist, who in four international competitions won two first-place prizes and one second-place prize.