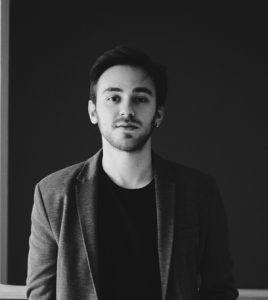 Emre Eröz, a fourth-year student in the Department of Music’s Composition and Theory program, recently received first prize in an international competition organized in China. In addition, he was awarded a second-place commission following a global call for scores by a Basel-based music duo, and has also had two pieces published online.

In the Sun River Prize New Music Composition Competition for Students, organized by the International Society for Contemporary Music and the composition department of the Sichuan Conservatory of Music in China, his string quartet was awarded first prize. The competition was open to all students of any age from around the world; Emre’s composition was chosen from among 115 pieces submitted by students in 22 countries.

A call for scores by the saxophone–trombone/euphonium duo  Signal attracted 162 entries from 44 countries. Emre’s piece “Deus Ex Machina” was chosen second among the four compositions that won commissions for their composers. He is now writing his commissioned piece, which Duo Signal will perform at a concert to be held in Switzerland in April.

“Deus Ex Machina,” along with another of Emre’s pieces, “Smash of Symmetry,” was also published in the University of California Los Angeles’s Online Music Library as a result of the Kaleidoscope 2020 Call for Scores, an open access project.