06 November 2014 Comments Off on Nanobiotechnology Conference Held at Bilkent 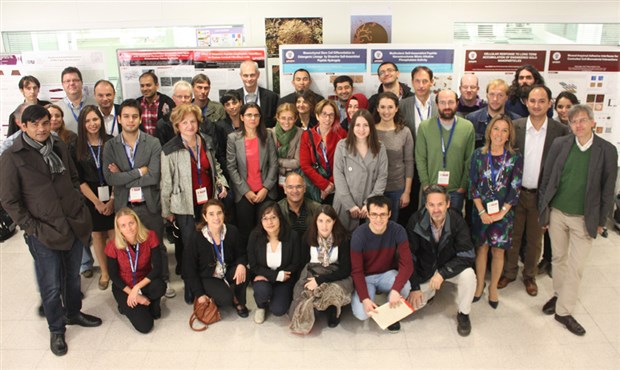 Last week, Bilkent University hosted the Bioinspired Materials Conference, a two-day event dedicated to biological architectures and their manipulation for the design of advanced materials. Organized by Assoc. Prof. Mustafa Özgür Güler and Asst. Prof. Ayşe Begüm Tekinay of UNAM, the event was intended not only to illustrate the cutting-edge research being conducted by bioengineering and nanomaterials researchers all around the globe, but also to foster collaboration among scientists with different academic specialties, who have much to benefit from combining their expertise to better understand what a single discipline is unable to explain. Over 20 prominent scientists described their research at the meeting, which included eight sessions of oral presentations, as well as posters from both Bilkent researchers and conference attendees.

Wrought into perfection by untold eons of natural selection, biological architectures often possess features far superior to designs produced under conventional approaches, and the prospect of using these readily optimized materials to solve complex engineering problems is highly attractive for scientists and engineers alike. Reflecting both this far-reaching draw of bioengineering at the nanoscale and the sheer diversity of life in its myriad forms, the talks at the conference covered a wide range of materials and approaches: protein subunits that combine into disease-targeting, receptor-blocking, imaging agent-carrying therapeutic platforms, blocks of self-assembled DNA that slide across lipid membranes, and “bio-computers” that replicate the function of logic gates using biological molecules rather than silicon-based circuitry were all among the topics discussed at the conference.

Sensors, a staple of bioengineering studies, were also highlighted at the meeting, as were designs for peptide-coated pores that detect the movement of individual molecules, troponin sensors for the early detection of cardiac conditions, and the label-free detection of small differences in DNA sequences. Blue-skies research, the pillar on which all engineering and real-world applications depend, also had its rightful place at the conference, which considered issues such as the localization of water in biological nanostructures and the determination of calixarene binding preferences in various proteins in addition to application-focused research.