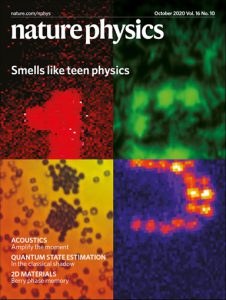 The October issue of Nature Physics highlights work by Asst. Prof. Serim Kayacan İlday (UNAM) and her research team, featuring it on the cover of the print issue as well as in the banner of the journal’s website.

Dedicated to the journal’s 15th anniversary, the issue includes a piece by past and present Nature Physics editors listing their favorite articles and describing why they found them so fascinating and important. One of those articles, by Dr. İlday and her team, appeared in the journal’s April issue this year under the title “Universality of Dissipative Self-Assembly From Quantum Dots to Human Cells.”

In the 15th anniversary piece, Elizaveta Dubrovina, the editor who handled the Bilkent researchers’ article, relates how she first became intrigued by Dr. İlday’s work during a poster session at an international conference, and then by coincidence – and to her “delight” – was assigned Dr. İlday’s submission in the course of her work at Nature Physics.

Pointing to the potential significance of the investigations described in the Bilkent researchers’ article, Dr. Dubrovina writes, “The high level of control demonstrated by the self-assembly method promises applications such as separation of different bacterial cells from a homogeneously mixed population or creation of aggregates with complex shapes. From a fundamental perspective, it will be intriguing to see if this method will help to provide insight into the physics of far-from-equilibrium processes that occur in biological and active matter systems.”