A new book by Dr. Gül Kurtuluş of the Department of English Language and Literature, titled “Convention and Contravention in Ben Jonson’s Three Comedies,” was released on October 29 by the Switzerland-based academic publishing house Peter Lang.

Following is a summary of the book’s content based on the publisher’s notes.

“Convention and Contravention in Ben Jonson’s Three Comedies: ‘Volpone,’ ‘The Alchemist,’ ‘Bartholomew Fair’” explores the role of comedy, carnival, laughter and satire in the selected plays, and what it means to deceive as well as to be deceived in Jonson’s world of drama. 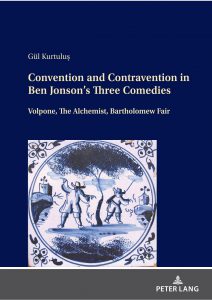 The book scrutinizes the playwright’s convention of comedy, which serves as a disguise for the realities of life. The three plays are examined in the context of a dialogue with Shakespeare’s “As You Like It,” “Measure for Measure” and “Twelfth Night”; the close analysis of their texts offers the reader a detailed study of the upside-down, carnivalesque world that enables Jonson’s characters to free themselves of their responsibilities.