10 December 2019 Comments Off on New Book By Onur İşçi 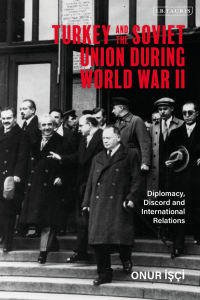 Based on recently disclosed archival documents in Turkish, Russian, German and English, Dr. İşçi’s book details diplomatic relations between Turkey and the Soviet Union between the years 1936 and 1947. After a long history of imperial conflict, successors to the Russian and Ottoman Empires were united in shared opposition to the Western-dictated international order and developed a strong partnership between the two world wars. Beginning with the Molotov-Ribbentrop Pact, however, relations between Ankara and Moscow plunged to several degrees below zero, as Ottoman-era Russophobia began to take hold in Turkish elite circles. For the Russians, hostility was based on long-term apathy stemming from the enormous German investment in the Ottoman Empire; for the Turks, on the fear of Russian territorial ambitions.

The book offers a new interpretation of how Russian foreign policy drove Turkey into a peculiar neutrality in the Second World War, and eventually into NATO. Dr. İşçi argues that this was a great reversal of Atatürk-era policies, and that it was the burden of history, not realpolitik, that caused the move to the West during the Second World War.