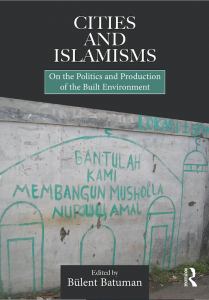 A new book edited by Assoc. Prof. Bülent Batuman, chair of the Department of Urban Design and Landscape Architecture and associate dean of the Faculty of Art, Design and Architecture, has been published by Routledge. The book is titled “Cities and Islamisms: On the Politics and the Production of Architecture.”

The volume follows Dr. Batuman’s previous book “New Islamist Architecture and Urbanism: Negotiating Nation and Islam Through Built Environment in Turkey,” which was published by Routledge in 2018. The collection of essays in “Cities and Islamisms” expands the theoretical framework of the earlier work to a global scale.

“The book sheds light on a particular facet of the link between politics and Islam through the analysis of the relationship between Islamism and the built environment,” says the publisher’s description, noting that the work addresses such issues as “national identity,” “everyday spaces and the making of Islamic milieus,” “the role of Islam in the making… of state ideology via architecture and urban planning,” and “transnational architectural exchanges through global Islam.”

The book “expands on these issues through case studies… [that] incorporate manifestations in Muslim-dominated countries, including those where Islam has been at the heart of state ideology (Pakistan and Brunei), those with influential grassroots Islamist networks (prerevolutionary Iran and Indonesia), those that identify with Islam through global exchanges (United Arab Emirates, Kazakhstan and Turkey) and countries where Islam is an increasingly significant reference utilized by political actors (Algeria and Lebanon).”