15 February 2016 Comments Off on New Books by Bilkent Faculty

The book is based upon a three-year-long TÜBİTAK-funded project, which consisted of ethnographic research carried out in a TOKİ housing estate that was part of the Northern Ankara Entrance Urban Transformation Project. The estate was built for those gecekondu (squatter housing) owners who did not have land titles, in order to relocate them when their homes were demolished as part of the redevelopment of the area. 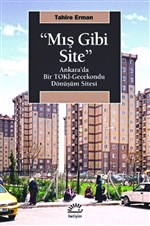 everyday practices of residents. It provides an in-depth understanding of the place and its people, presenting quotations from participants’ responses and hence letting people speak in their own words about their experiences. In doing so, it challenges stereotypical thinking about poor migrants from the countryside. It demonstrates the problems and dilemmas people face as they are incorporated into the mortgage system to become homeowners and into a formal housing setting with its own rules that aim to regulate behavior in the estate. The book makes a further contribution by drawing attention to what kinds of places are being created in Turkey’s cities as gecekondus are erased from the urban scene.

“An Expressive Theory of Punishment” by Bill Wringe

A new book by Asst. Prof. Bill Wringe of the Department of Philosophy, titled “An Expressive Theory of Punishment,” has just been published by Palgrave Macmillan (UK).

Dr. Wringe’s book is about the nature and functions of punishment. He argues that punishment’s function is to communicate a message about an offender’s wrongdoing to society at large. The book discusses situations where a state is punishing an individual citizens, and more complicated cases where something other than an individual is being punished – for example, the punishment of business corporations – and cases where the agency who is 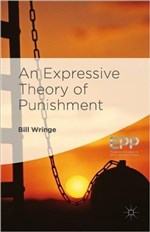 imposing the punishment is not a state – for example the punishment of war criminals by international tribunals. Dr. Wringe argues that many existing theories of punishment do not cover cases like these, although they are very important in contemporary society.