Researchers led by Asst. Prof. Bülend Ortaç of Bilkent University’s National Nanotechnology Research Center (UNAM) have developed a nanotechnology-based diagnostic system that can be used to detect SARS-CoV-2, the virus responsible for COVID-19. The system, which has been named Diagnovir, can detect the virus in 10 seconds with a swab taken from the mouth and has been demonstrated to perform with 99 percent accuracy.

The research leading to this achievement was conducted through a collaborative program that involved UNAM, Bilkent Holding and E-A Technology at Bilkent Cyberpark. The effort to develop a rapid diagnostic system was initiated soon after the discovery of Turkey’s first COVID-19 case and took place over the course of seven months. 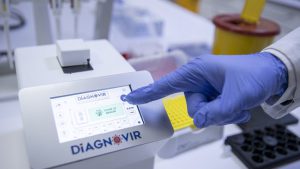 Diagnovir, as described by its developers, is an optically based diagnostic and identification system in which the color of a fluorescent signal changes in the presence of the virus, thus detecting it with great sensitivity. In this system, pathogens are detected within 10 seconds via a pathogen detection chip developed specifically for a biosensor device.

After a saliva sample is taken from a patient, it is mixed with a special solution and dropped onto the pathogen detection chip. If a pathogen is present, this will be indicated by the fluorescent signal.

In addition to its speed and accuracy, Diagnovir has other advantages. For instance, taking saliva samples from the mouth rather than inserting a swab more deeply into the oropharynx or the nasopharynx makes it much less uncomfortable for those being tested.

The system’s speed derives from the fact that unlike the commonly used PCR test, it is based not on sample replication, but rather on detecting the presence or absence of the virus using advanced optical methods. The developers drew on sophisticated concepts and techniques from biotechnology and materials science to design optical and electronic modules that provide both precise virus detection and high selectivity in detection.

The system has shown 99 percent success in virus detection in the preclinical pilot studies conducted so far. “We believe that the system will be widely used in our country and worldwide as a fast and reliable virus detection method,” the researchers declare.

On this assumption, investment into the infrastructure needed for mass production of the Diagnovir biosensor system has already started, with actual production planned to start in two months, as soon as permission is granted by the Ethics Committee of the Turkey Pharmaceuticals and Medical Devices Agency (TİTCK).

Because Diagnovir relies on a completely new technological infrastructure, applications for multiple patents have been made in order to protect the intellectual property rights involved in its invention. And since the system almost certainly has a high export potential, steps are already being taken to prepare the way for international as well as domestic sales.

It is hoped that the work on Diagnovir, conducted by Turkish researchers at UNAM and its partners, will have a significant positive impact on human health both domestically and globally. While its immediate use in the context of the current pandemic will be to detect SARS-CoV-2, in the future it is also expected to be of great utility in detecting other pathogens.