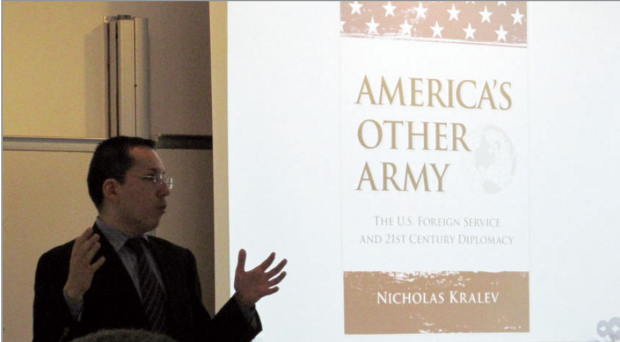 American author and expert on diplomacy and world affairs Nicholas Kralev gave a talk to senior Bilkent IR students on Monday, October 7 (courtesy of the US Embassy in Turkey). The talk was entitled “Diplomacy in the Age of Globalization” and was held in the context of the IR351 Globalization course taught by Assoc. Prof. Ersel Aydınlı.

Mr. Kralev spoke about the tasks of modern international diplomacy and explained what transformations the US Foreign Service has undergone in the aftermath of September 11, 2001. Bilkent IR students attending the lecture were curious to learn about the internal mechanisms of US diplomacy and the tasks that it faces in the 21st century.

A former Financial Times and Washington Times correspondent, Nicholas Kralev has traveled around the world with four US secretaries of state — Hillary Clinton, Condoleezza Rice, Colin Powell and Madeleine Albright. He has flown over 2 million miles and visited 83 countries. The author of “America’s Other Army” and “Decoding Air Travel,” Mr. Kralev is  also an expert in global travel and communication. He is the founder of Kralev International LLC, a consulting and training company in the fields of diplomacy, world affairs and global travel. Mr. Kralev holds a master’s degree in public policy from Harvard’s John F. Kennedy School of Government and speaks five languages.