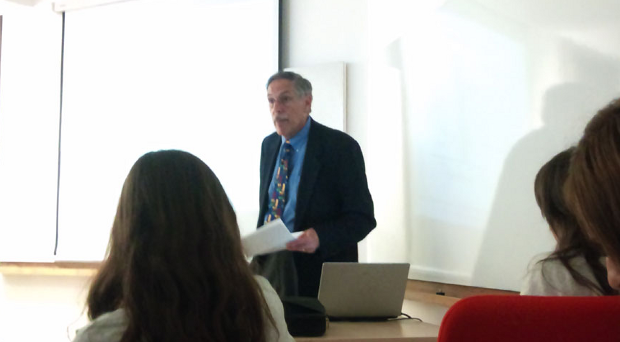 Last week the Department of Economics hosted Prof. Peter Diamond, professor of economics at the Massachusetts Institute of Technology and recipient of the 2010 Nobel Prize in Economics. Prof. Diamond delivered a lecture at the Department of Economics Seminar Series, entitled “Interpreting the Beveridge Curve.” The lecture focused on the patterns of recovery in the US labor markets, with the aim of identifying the stylized facts regarding the effects of the most recent economic crisis.

The Beveridge curve reflects a curve fitted empirically to observed combinations of unemployment and vacancy rates at each instant in time; a curve that can also be interpreted as reflecting the steady state relationship between unemployment and vacancies. The Beveridge Curve pertains to information about the matches between the vacancies posted by firms and by workers. Following the recent economic crisis, the matching rates in the US have decreased. Identifying the causes of this decrease is a necessary step in identifying the appropriate policy response.

In the lecture, Prof. Diamond presented several stylized facts from the US labor market, indicators allowing for a discussion of whether the decrease in matches was due to the business cycle conditions changing in the US or to a trend change. Identifying whether the effects are dominantly cyclical or structural provides a basis for policy guidance. The evidence and discussion presented by Prof. Diamond aimed at determining whether the phenomenon was a movement along the Beveridge curve or a shift in the curve. Movements along the Beveridge Curve suggest that there are cyclical effects in the labor market, whereas shifts of the curve suggest that there has been a structural change, creating a dominating structural effect. In the lecture, Prof. Diamond presented stylized facts that provided evidence that cyclical effects rather than a structural change have resulted in lower matching rates.

Prof. Diamond was one of the three 2010 economics Nobel laureates, who were recognized for their work on the frictions in the labor market job search process and their implications for unemployment. The lecture was based on this search theory framework, which allows for identifying and discussing the patterns of hires and separations individually, rather than the sheer difference between the two that reflects the net employment patterns in a given period. Prof. Diamond reiterated the importance of doing so, given the very high levels of hires and separations that are hidden in the relatively low levels of employment generation.