14 October 2019 Comments Off on Not Musical Deserts: Music From Saharan Africa

Music has long been a signature of humanity. Whatever arts we choose to deliver our messages with, music always has a special place. This ability of music to be a manifestation of our deepest ideas and feelings is also reflected by societies on a larger scale. People from whatever country have their own wealth of music, ranging from folk to alternative styles; this wealth is one of the most authentic sources for understanding the inner dynamics of a society. For example, in Turkish folk music one can find traces of our lifestyle, our history, our values and so on. Unfortunately, however, because of the economic dominance and thus the cultural dominance of the West, most of the world seems to be influenced by Western-style music. This idea is planted in our perceptions: when someone mentions “classical music,” we tend to think exclusively of Western classical music. However, this approach is incorrect, as classical music from different cultures exists, such as Turkish classical music (aka Turkish art music), which has a dramatically different tradition, orchestration, and so forth.

This argument brings us to a mixtape titled “Music From Saharan Cell Phones,” made by Christopher Kirkley, a music archivist who visited Africa to make field recordings. The cell phone is an important invention in those countries; the locals trade their music exclusively via Bluetooth and SIM card. What Kirkley did was find local people and ask them to send music to him via those methods, in exchange for what he had on his netbook. 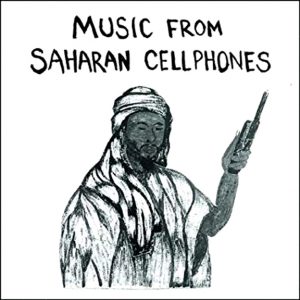 The content of this compilation is much different than that of a regular album. Most songs are not mainstream even in those countries; some are just amateur recordings produced using software such as FL Studio. Styles differ a lot – at one moment you may have psychedelic rock and at another, regular blues. Even African drum circle songs are present, to satisfy our cliché-fed minds. The use of Auto-Tune is not rare on this album, allowing us to understand how Africans have been affected by Western artistic choices.

The album has a production style that can be classified as lo-fi. However, it’s genuine lo-fi, not the type of artificial imperfection you see in intentionally “aged” guitars or ripped clothes. As some songs were played and recorded with analog instruments, then converted to digital form, and then sent via Bluetooth or SIM card, a lot of sonic quality has been lost. However, this is not a derogatory comment. The unintentional lo-fi sound evokes a strong feeling of gloomy vividness. Your mind wanders off thinking about the life that’s being lived by others, hundreds of kilometers away from you; the world is such a big place, and you’ll never get to experience it fully. With tracks such as “Polisario,” this feeling reaches its pinnacle.

This album will be an eye- (or ear-) opener for anyone who listens to it. It opens up to us a whole new world of living, making us realize that the Earth is much bigger than the segment we see around us. Musically, it’s also a different taste, as our minds have been subject to corrosion by Western-style aesthetics. It’s both a good listen and a piece of art, and definitely a must-listen for those who seek new musical adventures.