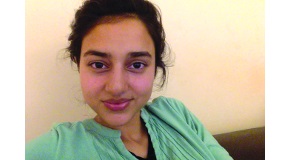 Viruses called bacteriophages (“bacterium-eaters”), or just “phages,” infect bacteria. A typical phage is nearly 15 times smaller than the most commonly studied bacteria (E. coli) in the lab. To put this size difference in perspective, consider the fact that a two-meter-tall human being is 15 times smaller (lengthwise) than a blue whale.
There are other fascinating facts about phages. For instance, they are the most abundant organisms on this earth; an estimate suggests that there are 10^31 phages on Earth at any given time. (Back-of-the-envelope calculation: The number of human beings on Earth is of the order 10^9. A 2016 estimate for the number of cells in the human body is of the order 10^13. In that case, there are nearly a billion phages for every human cell on Earth.) Moreover, phages are industrious – they launch 10^24 infections every second. Luckily, these abundant and hardworking viruses can infect bacteria, but not animals. 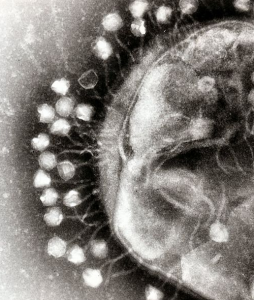 Due to their enormous numbers and merciless (as we will see below) methods, phages play a central role in the maintenance of life on Earth. For instance, they help to maintain the diversity of bacteria. If any bacterial strain starts to outcompete others and multiply excessively, phage infections destroy more individuals from that strain and thus hold it in check. Bacterial diversity is important because different bacteria perform all sorts of useful functions like cycling nutrients (oxygen, carbon, nitrogen, etc.) – by, for instance, performing photosynthesis or degrading dead organisms – and entering into symbiotic relationships with other life forms (including in the guts of humans.)

The electron microscopy image (by Dr. Graham Beards) at right shows many phages attached to a bacterium, possibly infecting it. But how do phages succeed in the infection of bacteria that are huge compared to them? They use superb tactics and equipment.
When not infecting bacteria, phages float around looking for bacteria to infect. At this stage, the phage travels light, carrying around only the stuff crucial for a successful infection. It has a capsid, which is a practical yet beautiful suitcase to hold its genetic material. This capsid is built from proteins expropriated from the previous bacteria the phage infected. The major goal at this stage is to find a host and transfer the genetic material housed in the capsid into that host. 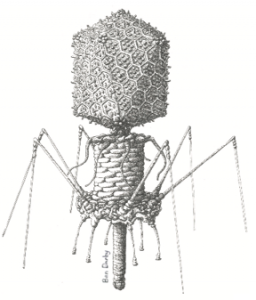 But at the same time, it is important to protect the precious genetic material from environmental hazards like UV radiation. The picture at right, taken from a book called “Life in Our Phage World,” shows an artist’s rendition of the T4 phage, which preys upon bacteria in the intestines of mammals. The T4 uses its long tail fibers (the spindly “legs” in the picture) to recognize the host bacterium and attach to it. The head holds the genetic material, and the tail (the narrow middle portions) is used to inject the genetic material into the bacterium.
If the viral genetic material injected into the bacterial cell is able to evade all the bacterial defense systems, it can wreak havoc. It has the capacity to seize all the biological resources of the gigantic bacteria (resources that the virus lacks). These bacterial resources are used to produce new viral genetic material as well as capsids. The genetic material and capsids are packaged together to create new virus particles. Ultimately, the virus bursts open the bacterial cell to release the new phages. These phages will find new hosts to infect, and so the cycle goes on.
The phage shape, tactics and names (T4, phiX174) are reminiscent of spaceships, intergalactic battles and droid names. Perhaps someone should create a “Cell Wars.”