15 April 2019 Comments Off on On Stage in the Chamber Theater: “Çok Tuhaf Soruşturma” 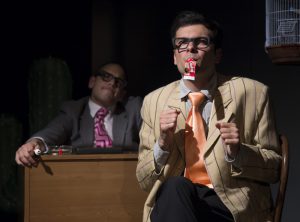 A new production of Ferhan Şensoy’s play “Çok Tuhaf Soruşturma” (A Very Strange Interrogation), staged by Department of Performing Arts students, had its premiere on April 12 in the Bilkent Chamber Theater. The play will run through May 15.

Written in 1998, “Çok Tuhaf Soruşturma” uses a humorous approach to explore a serious topic. The play focuses on the arrest, interrogation and imprisonment period of a wrongfully convicted man who is released only after spending six years behind bars.

Department of Performing Arts guest director Münir Canar offers the following summary of the plot: “A young man who comes eye to eye with the police becomes frightened, starts running and ends up being interrogated. His two close friends also get involved in the interrogation and share the same fate. Life in prison, the carelessness of the prison directors and the years filled with thoughts of escape are depicted. The play concludes with a surprising, bizarre twist; the message is that it’s okay not to talk about the unpleasant traces of the past.”