On the Cover of Angewandte Chemie 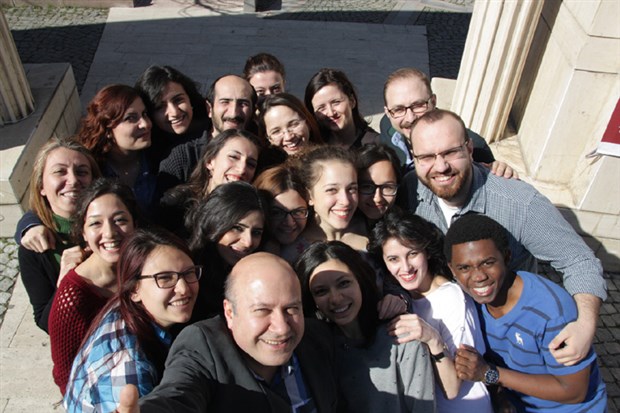 Work carried out by a multinational team, led by Prof. Engin Umut Akkaya of the Department of Chemistry and UNAM, was recently selected to appear on the front cover of Angewandte Chemie (April 27, 2015; Vol. 54, Issue 18). The article, “Intracellular Modulation of Excited-State Dynamics in a Chromophore Dyad: Differential Enhancement of Photocytotoxicity Targeting Cancer Cells,” has also been labeled a “hot paper” by the editors, based on the referee evaluations.

Angewandte Chemie is one of the most prestigious journals in the field of chemistry. It has been published for more than a century and a quarter, and has a high rejection rate. The front cover space is highly coveted; this marks the first time that work from a Turkish university has been featured there.

The article reports an activatable photosensitizer for photodynamic therapy of cancer.  The major novelty is that the design incorporates a glutathione-sensitive switch, which was demonstrated in this work to be preferentially “turned on” in cancer cells as opposed to normal cells.

Photodynamic therapy is an alternative cancer treatment modality, which depends on the generation of a reactive and short-lived form of molecular oxygen, following the absorption of light by a compound known as a photosensitizer.  Although it has been considered “promising” for a long time, photodynamic therapy has major limitations. The Akkaya group at Bilkent is one of the few research groups in the world addressing these limitations directly.

The conceptualization, design, synthesis and chemical and spectroscopic characterization of the compounds, along with the evaluation of their singlet oxygen generation capacities, took place at Bilkent.  The cover art for the article features a design by Bora Bilgiç, a former member of the Akkaya research group.