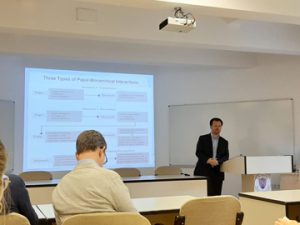 His talk, titled “Political Origins of Religious Homogeneity in Western Europe,” drew on his latest research project, in which he argues that the papacy – an extraterritorial religious authority with punitive powers (e.g., crusades, excommunication, interdiction, inquisitions) that lobbied for religious homogenization in an environment of fierce interstate competition without a hegemonic power – played a significant role in convincing monarchs to convert, expel or kill their non-Catholic subjects in Western Europe. In his presentation, Dr. Dr. Aktürk focused on the interaction between the papacy and local monarchs in the eradication of Cathar, Jewish and Muslim populations during the medieval period in four European polities: Sicily and Southern Italy, France, Portugal and Spain.

Dr. Aktürk’s work on the religious homogenization of Western Europe sheds light on the medieval origins of nationalism, the international system, the impact of internal crusades on European state formation, and the legacies of religious demographic homogeneity in Western Europe.