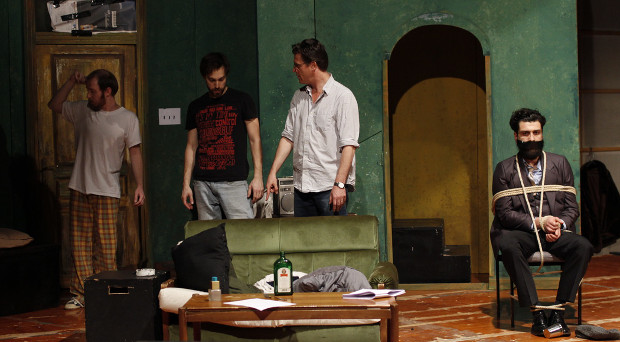 This month, the Bilkent Theater will be staging “Çıkmaz Sokak Çocukları” (Orphans), a three-character play by the American playwright Lyle Kessler. The play is about two orphaned young brothers and their encounter with a rich but shady businessman, and is set in a dilapidated row house in North Philadelphia in the 1980s.

In the play, Treat, the elder brother, played by Melih Efeçınar, supports his younger sibling through petty thievery, creating a protective environment for the seemingly simple-minded Phillip (Koray Alper), who never leaves the house. The dramatic tension starts one night when Treat kidnaps a rich older man, Harold (Aytek Şayan), who has his own motives, but eventually becomes a much yearned-for father figure to the boys.

Directed by the acclaimed American director Jason Hale, currently a visiting assistant professor in the Department of Performing Arts, “Çıkmaz Sokak Çocukları” is being produced as the graduation project for senior students majoring in theater at Bilkent.

“‘Orphans’ is a play that has captured the hearts of world audiences because the play is able to convey universal emotions within the circumstances of these very American characters,” says Mr. Hale. “I am very proud of my student actors for their ability to let the audience enter into this extraordinary emotional journey.”

“Orphans” has enthralled critics since its debut in  Los Angeles in 1983. It has had successful runs across the US and continues to be staged in theaters throughout the world, from Mexico to Japan to Turkey.

Translated into Turkish by Ali Neyzi as “Çıkmaz Sokak Çocukları,” the play is being staged at Bilkent with the assistance of production team members Meltem Keskin Bayur (assistant director), Yılmaz Ertekin (lighting design), Duygu Gökalp (set design), Gülçin Kültür (stage assistant) and Adnan Atalan (technical support), who, along with the three starring actors, are fourth-year students in the Department of Performing Arts.

“Çıkmaz Sokak Çocukları” will have its opening night in the Bilkent Theater Hall in the Faculty of Music and Performing Arts Building on Thursday, December 19 at 8 p.m. The show will run for four additional performances, on Friday, Dec. 20; Thursday, Dec. 26; Friday, Dec. 27; and Saturday, Dec. 28, all at 8 p.m.

Tickets are available for general sale at MyBilet for 10 TL. There will be bus service to the Tunus bus stop in the city, departing from in front of the FMPA Building following the end of each performance.

For more information, please see bilkenttiyatrobolumu.weebly.com, or call the department at ext. 1620.