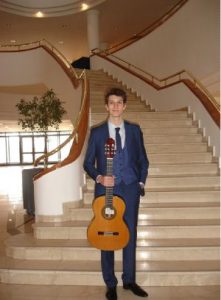 Despite being the youngest contestant in the 2020 Sarajevo International Guitar Festival Competition, Faculty of Music and Performing Arts undergraduate Özberk Miraç Sarıgül received first prize in the two-stage event, which took place online. His win moreover led to his being named a EuroStrings Artist, as the first Turkish guitarist to achieve this distinction.

EuroStrings Artists are emerging musicians who have won one of the EuroStrings Platform Festivals’ international guitar competitions. EuroStrings (the European Guitar Festival Collaborative) is cofunded by the EU’s Creative Europe Program. EuroStrings Artists have the opportunity to “tour Platform Festivals, challenge themselves on different international stages, share their experiences with other young artists and learn from world-known and established professional guitarists.”