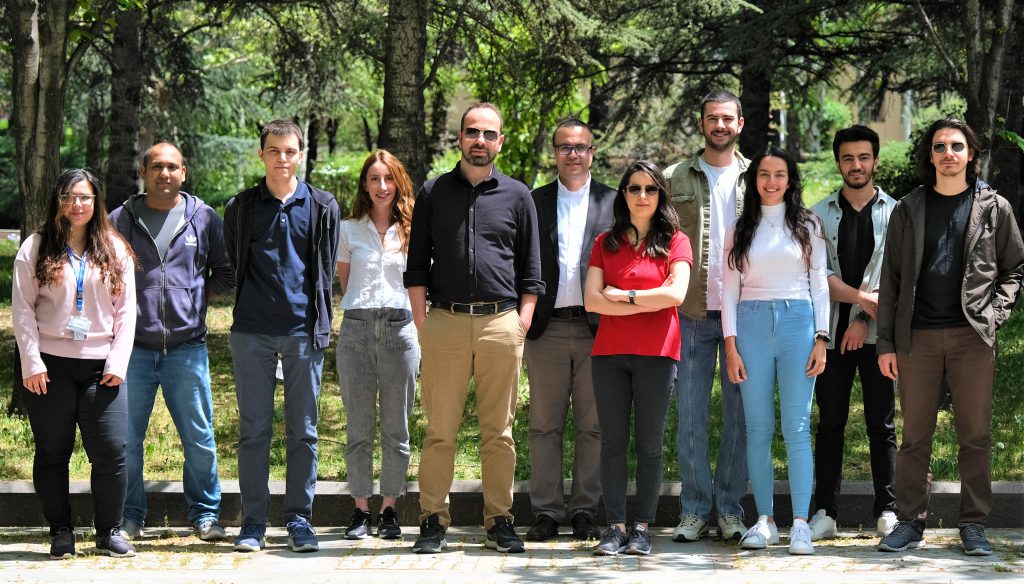 A collaborative research team led by Prof. Emrah Özensoy of the Department of Chemistry and UNAM has published a paper featured on the cover of the Journal of the American Chemical Society (JACS), a leading journal in the field of chemistry and its interdisciplinary domains.

Titled “Unraveling Molecular Fingerprints of Catalytic Sulfur Poisoning at the Nanometer Scale With Near-Field Infrared Spectroscopy,” the article appeared in the journal’s May 18 issue (and online at https://pubs.acs.org/doi/full/10.1021/jacs.2c03088).

Most of the industrially produced chemicals used in areas such as medicine, pharmaceuticals, energy storage/conversion, the automotive sector, electronics, paint, food and textiles are obtained using special chemicals called “catalysts,” enabling faster, cheaper, safer and more environmentally friendly synthesis of consumer products on a large scale. The cost of global catalyst production by the chemical industry approaches $50 billion/year, while the economic value of the products generated by these catalysts is estimated to exceed $0.2 trillion/year globally. A fundamental understanding of catalyst chemistry is therefore of paramount importance for industry.

Catalysts are often comprised of tiny particles with diameters of a few nanometers. Catalyst design, synthesis and characterization thus demand very high accuracy on the nanometer scale. While there exist several conventional spectroscopic/microscopic techniques providing nanometer-scale analysis of catalysts, there is typically a trade-off between spatial resolution and chemical information. In other words, many techniques that enable the detection of very small catalyst particles typically fail to provide detailed chemical knowledge of such systems. Furthermore, it was theoretically established by Ernst K. Abbe in 1873 that the spatial resolution of such analytical techniques is limited to half of the wavelength of the probe particles (e.g., photons, electrons, ions) used in detection.

In their recent work, the Ozensoy group and their research collaborators demonstrated for the first time that a novel spectroscopic technique called scattering-type near-field optical microscopy-based nano-infrared spectroscopy can be utilized to beat Abbe’s diffraction limit in the investigation of sulfur poisoning of catalytic particles at the nanometer scale under technically relevant experimental conditions. Prof. Özensoy notes that this work “also may pave the way for the future high-resolution/high–chemical definition studies on many other nanosystems relevant for electronics, battery technologies, sensors and nanobiotechnology.”

Highlighting the importance of this advance, an editorial feature referencing Prof. Özensoy’s paper was published in AZO Materials (https://www.azom.com/article.aspx?ArticleID=21662), an online publication for the materials science community.