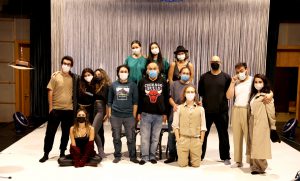 A new, Turkish-language play based on William S. Burroughs’s novel “Junky” premiered on November 2 in the Faculty of Music and Performing Arts Theater Hall.

Directed by Doğu Yaşar Akal (THEA/’09), the 90-minute production is being staged by Department of Performing Arts students as a senior project, the first such project to be presented this academic year.  Performances will run through November 26.

Authored by American Beat Generation writer Burroughs, translated by Gonca Gülbey and adapted for the Turkish stage by Mr. Akal, “Junky” is set in the 1940s and goes from New York City’s Times Square to New Orleans’ French Quarter and then to the back streets of Mexico City. As described in the publisher’s notes to a 2012 reprint edition of the novel, “‘Junky’ takes the reader into a world at once long-forgotten and still deeply resonant today. Burroughs’s first novel is a cult classic and a critical part of his oeuvre.”

Cast members are Ece Babayiğit, Emre Arslanbek, Esra Sürgü, Göktuğ Kemal Metin and Sena Kurdoğlu. The director was assisted by Mehmetcan Sarıkaya, who also did the video projection design. Costume design is by Arya Ertekin, with sound and lighting by Yılmaz Ertekin and choreography by Onur Dilek. Tickets for the play can be obtained from ticket.bilkent.edu.tr; the number of seats is limited due to COVID-19 social distancing measures.