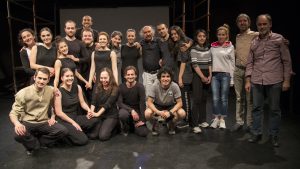 A new production of Nâzım Hikmet Ran’s work “Kuvâyi Milliye Destanı” (The Epic of the Independence War), staged by Department of Performing Arts students as their second senior project, had its premiere on May 9 in the Faculty of Music and Performing Arts Theater Hall. The play will run through May 17.

“The Epic of the Independence War” is Ali Berktay’s stage adaptation of Nazım Hikmet’s epic poem, written between 1939 and 1941. It consists of a prologue and eight parts. Each part tells a different story about the war, most them concerning its nameless heroes. Together, they present a kaleidoscopic view of the country’s outlook as shown by characters representing various segments of society.

Remaining performances will take place on May 14, 16 and 17 at 8 p.m. in the FMPA Theater Hall. Bus service will be provided from the FMPA building to Tunus Street in downtown Ankara following each performance.