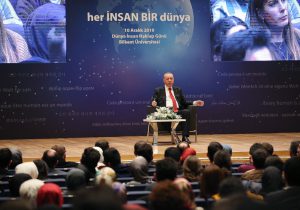 December 10 is Human Rights Day, celebrating the adoption of the United Nations Universal Declaration of Human Rights on that date in 1948. To mark this year’s Human Rights Day, a program on the theme “Her İnsan Bir Dünya” (“Every Human Is a World”) was held at Bilkent University, with President Recep Tayyip Erdoğan visiting campus to give a speech on the occasion. Members of Student Council and  student clubs as well as the faculty members attended the event, which was held in the Bilkent Concert Hall.

The program begin with opening remarks by Rector Abdullah Atalar. In his speech, Prof. Atalar listed some of the articles of UN’s declaration, including its affirmation of the innate freedom and equality of all human beings and the right to life, as well as its rejection of discrimination, slavery and torture. In discussing article 24, which states, “Everyone has the right to rest and leisure, including reasonable limitation of working hours and periodic holidays with pay,” the rector injected a lighter note, thanking Bilkent students for not reminding their professors of this.

Next on the program was a screening of the short film “Her İnsan Bir Dünya,” dealing with the topic of human rights.

President Erdoğan then gave his speech, in which he noted that human beings possess natural rights due to their sheer existence. “Violation of these rights, which start with the right to life and cover all phases of life, constitutes the gravest oppression inflicted on human beings,” he declared.

Following his formal remarks, the president answered students’ questions on several topics, such as his favorite leaders, his biggest dream, what is required to be a president, and where he expects to see Turkey in 20 years. Asked when the Presidential Library is expected to open, he first paused to praise the Bilkent University Library, and then stated that the Presidential Library will be opening soon.

President Erdoğan also offered advice to Bilkent students and spoke about their role in the future of the country, saying, “We will become stronger and stronger. And as long as we are stronger, I believe no one can stand in front of us. Especially as long as young people like you, future Bilkent graduates, exist and are present in both the state and private sectors in Turkey, I believe that our strength in terms of brain power will reach an entirely new level. So we depend on you for this.”