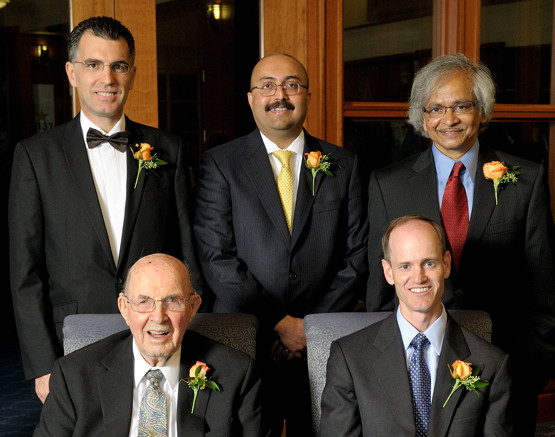 In September, Prof. Levent Gürel visited the University of Illinois at Urbana-Champaign (UIUC), his alma mater in the United States. Having visited UIUC numerous times before, he was no stranger to the twin cities of Champaign and Urbana. Nevertheless, this visit was markedly different from all the prior ones. This was a homecoming as an award recipient — and that no ordinary award!

Earlier in 2013, Prof. Gürel was selected by the UIUC ECE (Department of Electrical and Computer Engineering) Alumni Board of Directors as a recipient of its Distinguished Alumni Award. Given to only a few alumni each year to honor and highlight outstanding professional and technical contributions, this was the highest and most prestigious award that could be bestowed on Prof. Gürel as a UIUC ECE alumnus. He was selected on the basis of his contributions to parallel computing, fast solvers and accurate solutions of the world’s largest real-life problems in computational electromagnetics.

UIUC was established in 1867. The first courses in electrical engineering were offered in 1891. Today, the ECE Department has more than 21,000 living alumni in every corner of the world. Four to six distinguished alumni have been recognized annually for the past 44 years.

Levent Gürel received MS and PhD degrees in electrical and computer engineering from UIUC in 1988 and 1991. Those two diplomas gave him the edge to immediately find a job at IBM’s prestigious T. J. Watson Research Center despite a difficult job market at the time of a severe recession.

Since 1994, Prof. Gürel has been a faculty member in the Department of EEE at Bilkent University. He founded the Computational Electromagnetics Research Center (BiLCEM) in 2005. In recent years, his research group has broken several world records by solving extremely large integral-equation problems. He has been named an IEEE Distinguished Lecturer, tasked with sharing his knowledge and experience with other researchers all over the world. Prof. Gürel is a Fellow of IEEE, the Applied Computational Electromagnetics Society (ACES) and the Electromagnetics Academy (EMA).