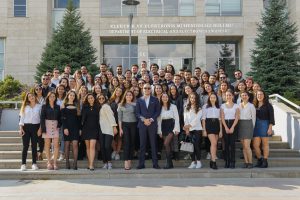 On the afternoon of Sunday, October 20, the Radio Bilkent staff gathered for a meeting at which an update regarding the station’s overall achievements was given and discussed. The general coordinator reviewed the budget and offered suggestions for further improving financial management. The broadcasting coordinator then provided some statistics on Radio Bilkent listeners and encouraged the staff, stating, “We’re making huge progress in our broadcasting quality.”

Also during the meeting, it was announced that the station’s “Secret Friend” activity, where a staff member draws a name of a fellow member and anonymously leaves small presents around the Radio Bilkent premises for the other person to find, will take place again this year. The purpose of the activity is to strengthen the bonds among station staffers and thereby help them function better as a whole.

After a lunch break, everyone stepped outside for group photographs. First, each unit had photos taken, after which all of the units came together for a big “family photo.”