09 April 2019 Comments Off on Radio Bilkent Hosts Can Gox 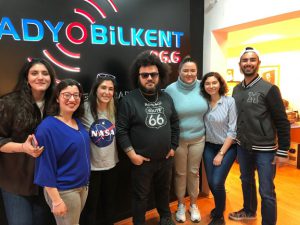 On March 30, Radio Bilkent welcomed one of Turkey’s most talented rock and jazz singers, Can Gox, to its studio to chat with the hosts of the “Roots” program. The broadcast started in an interview-type format but evolved into a more informal conversation.

The topics discussed included the musician’s latest album and his gripping covers of other talented artists; Mr. Gox also announced that he will be releasing a new single on April 5. In addition, some false statements concerning him that have been circulating on the internet were refuted. During the conversational portion of the broadcast, in response to a listener’s comment Mr. Gox said that he sees his concerts as reunions with his fans, where he aims to promote an atmosphere of friendship and brotherhood