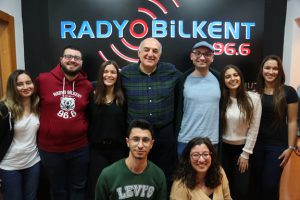 Last week, Radio Bilkent welcomed Necati Güler to the station for an interview. Mr. Güler, one of the best-known names in the history of basketball in Turkey, discussed his own career as well as that of his sons, and also talked about the family’s foundation, the Güler Legacy.

During his years in professional basketball, Mr. Güler was a member of Turkey’s national team as well as teams fielded by the country’s leading football clubs, first as a player and later as a manager. He passed his talent and passion for the sport on to his sons, Sinan and Muratcan, who also became basketball players. However, Mr. Güler noted, he made an effort not to pressure them or micromanage their careers; his main role was in providing motivation.

Mr. Güler was especially eager to talk about the Güler Legacy, which he and his sons manage and operate. The purpose of the foundation is to help children who love basketball, but whose families don’t have the financial resources to support their interest in the sport, by providing  basketball schools and camps for them to attend. There, youngsters not only develop their basketball skills, but also learn sportsmanship and life skills that will be of value both on and off the court.