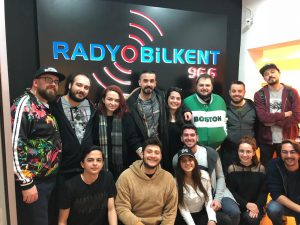 Last week, Radio Bilkent welcomed the improvisational comedy team Post42 to campus for a lunchtime performance and a guest appearance on the popular Drive Time broadcast.

Post42’s incredibly funny and well thought-out “Soğuk Savaş” (Cold War) videos have made the four-person ensemble a YouTube sensation. In the videos, the members of Post 42 make ice-cold “dad” jokes to each other, while trying to keep from laughing.

At Bilkent, Post42 brought their “cold war” concept into a conference room packed with an audience of Bilkent students on lunch break. There, the quartet used jokes submitted by the students as a take-off point for their performance. They definitely made the students’ day with their clever presentation of the jokes and authentic attitude.

Later in the afternoon, Post42 joined Radio Bilkent’s Drive Time show, where they had the opportunity to link up with fans who called in to the station to chat during the live broadcast. They talked about various subjects and answered the most-asked questions from students and other Radio Bilkent listeners.