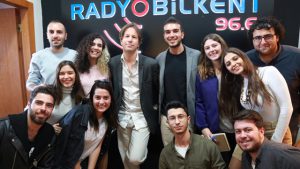 On October 25, Radio Bilkent welcomed philosophy professor Bence Nanay for an hour-long noontime interview, broadcast live by the station. Prof. Nanay, who is a faculty member at the University of Antwerp in the Netherlands, was on campus for a conference on imagination being held by the departments of Philosophy, Neuroscience and Psychology. Two students from the Department of Translation and Interpretation assisted with the interview, in order to make it accessible to as many Radio Bilkent listeners as possible.

Answering questions prepared by the station’s content management unit, Prof. Nanay talked about his academic career as well as his work outside the field of philosophy. He mentioned that he loves critiquing films, although he does not have time to do this on a regular basis. He also said that if he had not been a philosophy professor, he would have wanted to own a restaurant.

Turning to discussion of his academic work, Prof. Nanay spoke about his area of interest: mind fragmentation. He explained the concept with respect to the interaction of self-control and temptation, highlighting key points from a public lecture on the topic that he had presented the previous day.