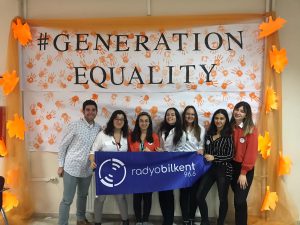 Since 2017, the Platform Up program of the Dokuz Eylül University Faculty of Business has hosted the Turuncu Zirve (Orange Summit) event to raise awareness of violence against women by conducting activities for high school and university students. Radio Bilkent participated in the summit for the first time in 2019, and did so again this year in order to support activism for women’s rights and gender equality.

The summit took place during the 16 Days of Activism, a global campaign that begins each year on November 25, the International Day for the Elimination of Violence Against Women, and runs through December 10, International Human Rights Day. Throughout that period, summit participants conducted awareness-raising seminars, film screenings and person-on-the-street interviews on the subject of gender equality.

Representatives of high-profile humanitarian organizations such as UNFPA Turkey, UN Women Turkey and the WHO have attended Turuncu Zirve in recent years. A number of universities and student groups have also taken part and given presentations describing what they have done to raise awareness on topics relating to gender equality and violence against women.

Held online this year due to the pandemic, the 2020 summit produced a manifesto in the form of a video focused on breaking through gender stereotypes about women; the manifesto combined presentations and videos from the participating universities. Radio Bilkent, represented by its staff of student volunteers, was among the organizations contributing to the video, which can be viewed on the station’s Instagram and Twitter accounts.