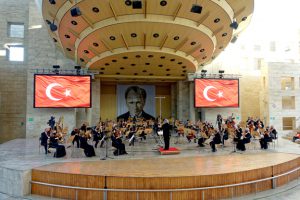 On October 25, the Bilkent Symphony Orchestra performed a Republic Day concert. The program featured works by the “Turkish Five,” the Republic’s first generation of composers, as well as pieces by two of their students.

The Five – Necil Kâzım Akses, Hasan Ferit Alnar, Ulvi Cemal Erkin, Cemal Reşit Rey and Ahmed Adnan Saygun – played a leading role, both as composers and as educators, in founding the young country’s music institutions. Combining their education and experiences abroad with an approach that also drew upon the richness of Anatolian music, they sought an original language. 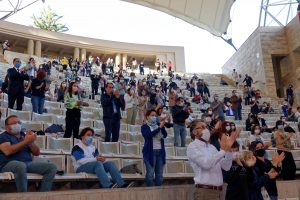 Conductor Elşad Bagirov led the BSO in a performance that began, appropriately, with the introductory music from the “Cumhuriyet” (Republic) soundtrack by Muammer Sen, a composer from a later generation who studied with Saygun. Next on the program was “Sesleniş” (Calling) by Akses, composed for the Republic’s 50th anniversary in 1973; “Dönüşüm” (Transformation), another selection from Sen’s soundtrack, followed. The BSO then performed the final movement from Rey’s “Türkiye Senfonik Rapsodiler” (Turkey, Symphonic Rhapsodies), concluding the first half of the program. 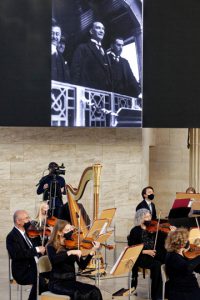 After an intermission, the concert continued with the overture to the Republic period’s first opera, “Özsoy,” by Saygun – a work that premiered in 1934 in honor of the Shah of Iran. The remaining pieces on the program consisted of two movements from Alnar’s “İstanbul Suite,” a work based on the soundtrack he composed for the film “İstanbul Sokakları” (Streets of Istanbul); the Allegro movement from Erkin’s “Sinfonietta”; “Bozkır” (The Steppe) from “Cumhuriyet”; and the final movement from “Esintiler” (Inspirations) by Ferit Tüzün, who studied with Erkin.