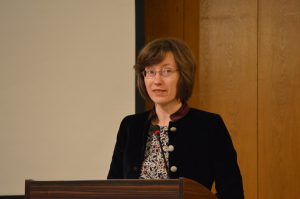 On December 6, the Bilkent University Department of History hosted an international workshop on the topic “The Byzantine Countryside: Insular and Coastal Perspectives.” The workshop, which was part of the 2019/20 Byzantium at Ankara Seminar Series, brought together historians and archaeologists from several institutions in Turkey, Spain and Italy.

Prof. Elena Boeck, former director of the Harvard University– Dumbarton Oaks Research Library and Collection, delivered the keynote speech. In her presentation, Dr. Boeck discussed the importance of the Column of Justinian in Constantinople during the late Byzantine and early Ottoman periods.

The rest of the speakers focused on the changes experienced in rural settlement patterns on islands such as Cyprus, Sicily and Sardinia as well as in coastal areas such as Caria during the period that witnessed the so-called transition from the Romans’ unified Mare Nostrum to a Great Sea divided among different cultures and religions. Elisabetta Giorgi (University of Siena) explored the vital role of water in shaping the rural hinterland of Gortyn (the capital of Byzantine Crete), while Lucia Arcifa (University of Catania) and Angelo Castrorao Barba (CSCI Granada) highlighted the existence of an internal frontier between western and eastern Sicily. Ufuk Serin (Middle East Technical University) and Luca Zavagno (Bilkent University) presented the results of recent archaeological surveys on the Karpas Peninsula in Cyprus and in Iassos in Caria.

More information about the seminar series may be found at http://byzantiumatankara.com/index.html.