BY ALTU? KARAKURT (EE/II)
to introduce to you my favorite ska band, Reel Big Fish. However, I realized that most of my readers may have never heard of this genre, which is not surprising, considering how small the ska community is. So, here is my brief introduction to ska and a small list of my favorite bands in the genre. 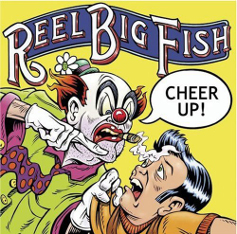 For a total outsider, I would define ska (the third wave of ska, which has been the most popular one recently) as the cheerful harmony of humorous lyrics, shiny brass instruments, bouncing upbeat guitar rhythms and catchy bass lines that make you move, along with simple drumming in the background.

I think the way the brass instruments are used in this genre is very interesting. The songs are generally based on continuous short bass lines and frequent upbeat guitar strumming. The brass sections suddenly come into the foreground with short, fast parts, interrupting this setup, then go back to the background playing slower parts (and are sometimes even muted), until their next interruption. With its creative rhythms, ska makes you swing your shoulders to the long, moving bass and shake your head to the sudden, fast appearances of the brass instruments and the upbeat guitar chords.

The first examples of ska were seen in Jamaica in the 1950s. Historically, it is associated with reggae, blues and Caribbean music. The modern ska bands have shifted more toward rock music, but the genres just mentioned are still very influential. The sound of the older ska bands is slower and mostly reminds me of Jamaican reggae and afrobeat. However, when I study the modern ska bands, I see more resemblances to rock, punk and occasionally to modern interpretations of reggae.

Reel Big Fish consists of vocalist/guitarist Aaron Barrett as frontman, plus a drummer, a trombonist, a trumpeter, a saxophonist and a bass player. What makes them special is Barrett’s creative musical approach and the band’s famously energetic live performances. Their musical style is very groovy, but still closer to rock music than the other genres that ska is related to. They use very creative and varied rhythms for the main guitar, which is very much in the foreground, as well as rich brass sections performed by all three wind instruments. They have released a very good “best of” album called “Favorite Noise.” It’s worth checking out, along with two of my favorites, “Cheer Up!” and “Monkeys for Nothing and Chimps for Free.”

Tomas Kalnoky formed Catch 22 in 1996 and then Streetlight Manifesto in 2002. Throughout the following years, four members of Catch 22 played in Streetlight Manifesto, and I really like the earlier stuff of Catch 22 that was released by those members and especially Kalnoky. So I see Streetlight Manifesto as a follow-up to Catch 22 and wanted to introduce them as such. Catch 22’s most successful and popular release is “Keasbey Nights,” which was re-released by Streetlight Manifesto as a full-album cover. I appreciate both versions, and it is interesting to observe the differences between them. Stylistically, both bands are similar to Reel Big Fish, except for the vocals and brass sections. Kalnoky prefers to employ harsher vocals, and from time to time the band uses jazzy brass solos. I would suggest their 2003 release “Everything Goes Numb” and the first three songs from “Somewhere In Between.”

The music of the Skatalites, a band formed in the early 60s, is an example of the earlier interpretations of ska. Their sound reminds me so much of reggae that I think they can even be categorized as a fusion band of the two genres. Their music is more relaxing than rhythmic. I think the Skatalites are a good example of the first wave of ska, where the tempo is much slower and the sound is closer to afrobeat and reggae music. I recommend their live release from the Lokerse Festival in 2006. 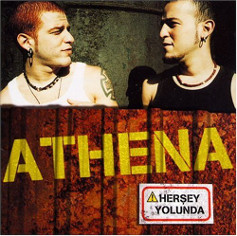 Athena is a well-known Turkish band. However, their music is not known as ska in Turkey — they are, rather, regarded as a plain rock band. However, I would define their music as **************** ska-punk. There are many mainstream ska-punk bands on the scene, such as Less Than Jake and Sublime. However, in terms of sound, I think Athena is the most creative among them. Their strongest side is their talented guitarists Hakan and Gökhan Özo?uz. They manage to compose very catchy and easy-listening but also, rhythm-wise, very rich riffs. Check out their albums “Her?ey Yolunda” and “Tam Zaman? ?imdi.”

This playlist was planned to be funky and groovy. Instead, it came out as varying from funky to calmer songs. I like how the music goes its own way.
!!! – One Boy/One Girl
Bedük – Under Bright White Lights
Chromeo – Night By Night
Miami Horror & Alan Palomo – Holidays
Capital Cities – Center Stage
Pompeya – 90 (Korablove Remix)
Breakbot – Baby I’m Yours
See you next time, with some hip-hop and jazz fusion. I would also like to thank Ezgi Irmak Yücel for her amazing contribution to the mixtape.