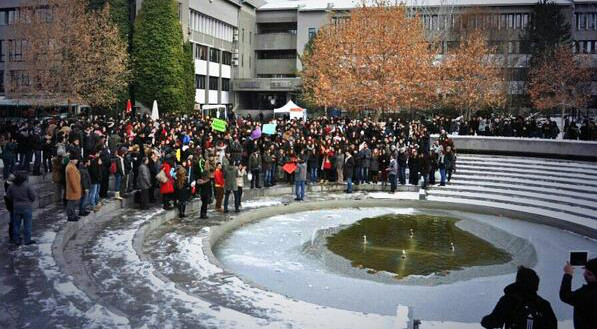 A group of Bilkent University students initiated a boycott on Monday, December 9 in front of the FEASS Building to protest the table d’hote meal prices on campus. Students who are members of the Federation of Thought Clubs organized the demonstration, with protestors bringing their own food rather than entering the dining halls, and stationing themselves near the Main Campus alley to call for lower prices.

The basic student meal plan at Bilkent is a table d’hote system, offering students set meals for breakfast, lunch and/or dinner. Purchase of the meal plan is optional. Prior to this month, students could buy a prepaid food service plan to cover their meals throughout a semester or academic year. During the week preceding the boycott, a change in this system was announced. Under the new system, students may purchase credits for as few as five set meals at a time, at a price of 3.15 TL/meal.

The protesting students stated that the meal prices on campus are too high for student budgets. “We started our boycott on December 9 with our homemade sandwiches in front of the main alley fountain,” said a spokesperson for the group. “We believe that by acting in unity, we can resolve the issue. We want a decrease in the fixed menu price and we would also like to see vegetarian alternatives on the menu.”