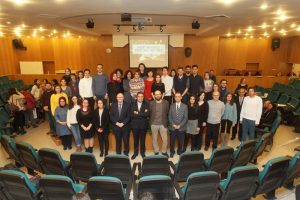 Turkish (TURK 101–102) is a required course for Bilkent undergraduates. To celebrate the achievements of students who have completed the course, the Turkish Unit held this year’s TURK 101–102 award ceremony on November 29. At the event, 10 students received awards for creative blog posts they had written during the 2018–2019 academic year.

In the course, which hones creative writing skills, students are asked to write essays about books they have read and contemporary cultural and artistic events they have attended during the academic year. Students are expected to express themselves by developing arguments, as well as to demonstrate a good command of Turkish.

The essays singled out for recognition were chosen by two juries made up of members from the Turkish Unit and the Department of Turkish Literature, who evaluated 4,000 pieces preselected from among the approximately 18,000 posts written by students taking the course that year.

The ceremony included a talk by novelist Levent Cantek, who then joined Rector Abdullah Atalar in presenting certificates and books to the award-winning students.