24 February 2014 Comments Off on SYCHOTIC WALTZ

This week I would like to introduce you to a very special band, Psychotic Waltz (PW). They are from San Diego, California, and have never gotten mainstream attention, so it is quite natural if you have never heard of them. They define their music as “hippie metal,” which perfectly fits their musical style.

The band was first formed under the name “Aslan” but then had to change this due to the existence of another band with the same name. They resolved the problem when a friend commented that one of their songs sounded like some kind of “psychotic waltz.” Upon hearing that, they first used the phrase as the title of the song, and then also as the band’s name.

Psychotic Waltz released four stunning albums from 1990 to 1996 and then disbanded. In 2010 they reunited, at that point lacking some band members. But after a short time they were back with their full original lineup again, and planning to record a new album soon.

After this brief introduction and history, it is now time to talk about PW’s music. I will discuss each of their four albums separately. 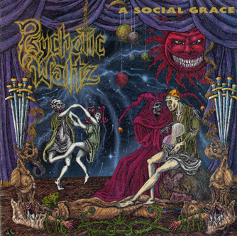 Their groundbreaking debut, “A Social Grace” (ASG), came in 1990. The music can be described as a hybrid of Fates Warning and some **************** techno-thrash (I am planning to talk about this underground term and the genre it refers to in the following weeks) bands such as Watchtower, Mekong Delta and Realm. The twin guitar compositions by Dan Rock and Brian McAlpin are really crazy, and can be heard circling in the background all the time. Ward Evans’ bass playing is very consistent. The same thing is true for Norm Leggio’s drum work, and by mimicking the guitar melodies in some places, it really gives a strong push to the songs. These features, combined with Buddy Lackey’s extremely strong, melodic and unique, mostly high-pitched vocals, make ASG a genre-bending record. The song structures are very chaotic, but at the same time well organized in their own strange way. Lackey also plays the flute on ASG (he shows his gratitude to Ian Anderson for being an inspiration to him by thanking the Jethro Tull frontman in the album’s liner notes), and he and Rock contribute with keyboards throughout the album. It is hard to choose favorite songs from this album (and the same thing applies for the other three), but for the sake of reference and for new listeners of PW, here are a few:

… And the Devil Cried, A Psychotic Waltz, Spiral Tower, Nothing 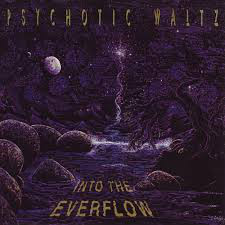 Two years after ASG, PW recorded “Into the Everflow” (ITE). ITE’s producer was Mekong Delta’s main composer and bass player, Ralph Hubert. Compared to ASG, ITE is more psychedelic, has a darker atmosphere and is less related to techno-thrash. Whammy bar tricks and intelligent use of harmonics in the guitars dominate the album. Lackey’s singing is again perfect, but this time demonstrates less experimentation than in ASG. The song structures are complex, and ups and downs in the songs are well connected with beautiful riffs. Keyboard duties are carried out by Dan Rock, strongly contributing to ITE’s psychedelic atmosphere. Here comes the hard part, making song suggestions for the album:

“Mosquito” was released in 1994. The album has been criticized by many for having not-very-complicated, standard song structures. I don’t agree with this unfair judgment. Yes, I agree that Mosquito is a less complex album than ASG and ITE, but simplicity is not necessarily a bad thing. Bands often get disparaged for lacking complexity in their work, which in my humble opinion is not an adequate criterion for valid criticism. PW’s signatures are everywhere in the album—it’s just a plain beautiful record with less experimentation and complexity, that’s all. Here are only a few of the great songs on the album:

Lovestone Blind, Shattered Sky, Dancing in the Ashes, Locked Down

After “Mosquito,” PW continued their tradition of releasing albums at two-year intervals, and in 1996 “Bleeding” found its place on the shelves. It features a lineup change: Ward Evans was replaced by Phil Cuttino, which did not make a huge difference in the band’s sound, in my opinion. “Bleeding” is similar to “Mosquito” in terms of song structures, and in fact maybe even simpler. A more extensive use of keyboards than in the first three albums supplies a mellow sound, even though there are some “dynamic” songs like “Faded.” Apart from those details, “Bleeding” is a standard (which means great) PW album. Again, some song suggestions:

I strongly recommend PW first to rock/metal listeners and then to every music listener who likes discovering new bands and is open to exploring different music genres. You might want to catch up with their earlier work before they release their new record. So until next time, stay connected to music!