Symbols of the Kilims

09 March 2020 Comments Off on Symbols of the Kilims

Kilims tell the stories of people we don’t even know existed, going back hundreds and thousands of years ago. Kilims are the language of their yearnings, fears, sorrows, joys, and much more. Their history, as far as is known, goes back to 8000 BCE. The meaning of the word “kilim” remains unknown even today, but it basically applies to the woven carpets that were produced across a wide geographic area, from the Balkans to East Turkistan. Weaving was actually quite a common craft throughout the ancient world; what makes kilims special is that they share the many of the same symbols, even when they were woven in different geographies. Now, let’s take a look at some of those symbols and learn the language of the ancient people. This article was written with the guidance of Ahmet Diler and Marc-Antoine Gallice’s book, “Symbolique des Kilims.”

The mother goddess is one of the most common symbols of the kilims, representing the feminity, compassion and fertility of women and Mother Earth. The mother goddess is a common figure in various mythologies; for example, the goddess Ma of Cappadocia and the Kingdom of Pontus, the Phrygian goddess Cybele, or Artemis of Greek mythology. The figure is basically a pregnant woman who puts her hands at her waist to support her belly. For this reason, the motif is also often called the “hands-on-hips” figure.

The cleat motif represents the head/horns of a ram or a bull; it therefore symbolizes power, masculinity and courage. This motif is linked with the mother goddess culture, since these animals were sacrificed to her during prayers; therefore, especially in Mesopotamian culture, they were sacred.

Burdock, a plant that produces prickly burrs, is widely present on the Eurasian steppes. Since it’s a plant, it represents fertility; but is that all? Why burdock, and not some other plant? The answer is that the symbol was first used as the representation of the sun, the source of all life. Over time, this origin was forgotten, and the symbol came to be seen as depicting a plant that the villagers knew very well, since they had a hard time combing out the burrs from sheared wool. But originally, the motif represented femininity and the sun. 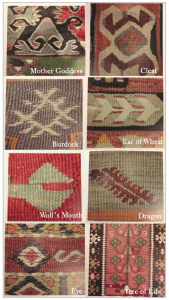 Since grain is used in making bread, it was sacred to ancient people, and it was unevitable that depictions of it would be used as kilim motifs. The most common of these is the ear-of-wheat motif. When fully mature, the wheat kernels fall into the soil and start the cycle of life again. Therefore, the symbol represents fertility and rebirth.

The wolf is an interesting creature in the sense of its ability to survive even when living close to humans. Both beings are afraid of each other, but somehow have lived side by side throughout history. A Turkish legend tells us that a she-wolf named Asena nursed an injured Turkish boy and saved him from death. The wolf was then impregnated by the boy and gave birth to half-wolf, half-human creatures, who became the leaders of a strong Turkish clan. So in this interpretation, the wolf motif represents protectiveness, ancestry, power and guidance.

On the other hand, the wolf’s mouth can also represents violence and fear, since villagers were afraid of these animals, especially because they sometimes visited villages during the cold of winter in the hope of finding something to hunt.

The dragon has found a place for itself in many cultures, even if it doesn’t exist. Or maybe it did – who knows? The protective, dominating nature of the creature has always been attractive to humankind, so people honored its superior virtues and made it a part of their culture. Ancient humans believed that dragons came from the sea, from faraway lands, and that they were rulers of the sky and sea. In Chinese cosmology, these creatures were even thought to bring heavy rain and storms.

The tree of life is a complicated figure that represents many ideas, beliefs and religions. It’s the tree of good and evil, since it caused Adam and Eve to be expelled from paradise. It’s also the link between the sky and the ground, which symbolizes our connection with both the gods and the dead. Moreover, it’s the source of life, since it gives shelter, contains water, and holds the secret of our existence.

The eye motif is widely known and used in many cultures, even in the modern world. For example, eye-figured charms are used to ward off the evil eye, the malevolent supernatural energy that harms people when they are unaware. This motif symbolizes the divine power that we hold, and also the illumination of our souls. It appears in ancient Egyptian mythology as the eye of Horus, representing protection and royal power.