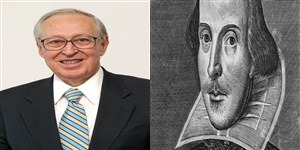 In honor of the 450th anniversary of Shakespeare’s birth (1564), Prof. Talat Halman, Turkey’s first Minister of Culture (1971), has published a large new volume, “William Shakespeare: Aşk ve Anlatı Şiirleri” (Poems of Love and Narration). The bilingual book, published by Türkiye İş Bankası Kültür Yayınları, features Prof. Halman’s verse translations of such long poetic tales as “Venus and Adonis,” “The Rape of Lucrece,” “A Lover’s Complaint,” “The Passionate Pilgrim” and “Shall I Die?”—a total of nearly 4 thousand lines in meter and rhyme in the original and in Prof. Halman’s Turkish versions. These poems include romantic narratives of unrequited infatuation, a desperate rape, and an infamous betrayal. Many of them glorify or bemoan love. They all have Shakespeare’s iconic lyrical power. 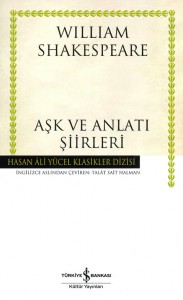 The book constitutes a Turkish literary landmark. With all of Shakespeare’s 37 plays and 154 sonnets having previously been translated and published in Turkish, Prof. Halman’s book now completes the publication of all of Shakespeare’s works in Turkish—a feat yet to be achieved in most other languages.
Prof. Halman is dean of the Faculty of Humanities and Letters and serves as chairman of the Department of Turkish Literature and acting chairman of the Department of English Language and Literature at Bilkent University. He is a noted Shakespeare scholar/translator. In the early 1950s he translated “Macbeth” using “aruz” meters (classical Turkish prosody), and in the 1960s, dozens of Shakespeare’s sonnets in meter and rhyme. He published his book of the complete sonnets in 1989. The prominent actor Müşfik Kenter presented Prof. Halman’s one-man play “Heroes and Clowns: Shakespeare’s World” 75 times at İstanbul’s Kent Players Theater in the 1986-87 season. The text of the play was published in book form three times in later years. Prof. Halman presented it as a dramatic reading program by himself or with Yıldız Kenter or Defne Halman scores of times. He has also given numerous lectures and published articles on Shakespeare in the United States and England as well as in Turkey.