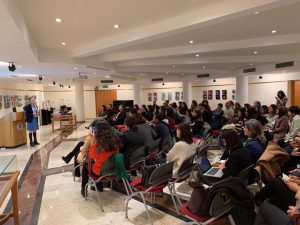 Assoc. Prof. Saime Özçürümez (POLS) was the second speaker for the “Talks on Migration” series organized as part of the Jean Monnet Module on European and International Migration Law. Her talk, based on in-depth research she has conducted, was titled “Why Does Social Cohesion Matter in a Forced Migration Milieu?”

The “Talks on Migration” series will continue to explore a variety of topics related to migration during the spring semester.