TDP Has a Strong Start for Its 15th Year 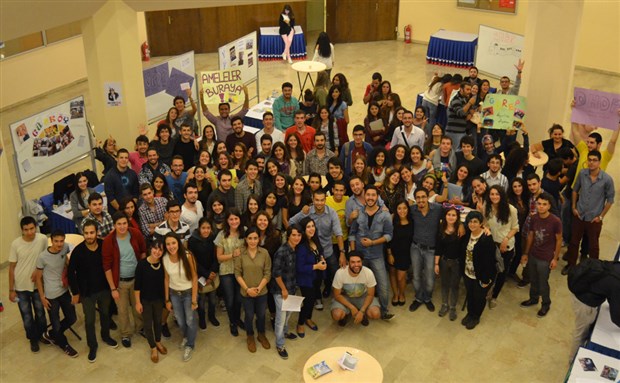 The Social Awareness Projects (TDP/Toplumsal Duyarlılık Projeleri) student organization held its opening meetings/receptions for the new semester last week, on September 17 on East Campus and September 18 on Main Campus. TDP welcomed new members and introduced them to the group’s ongoing volunteer projects. This year’s crowd was much larger than usual, with new members numbering nearly 350.

TDP has conducted community service activities for 15 years, in line with its motto, “What about being part of the solution, instead of the problem?” TDP was founded after the Marmara earthquake in 1999, with the objective of providing help to victims of the quake. Later, TDP started its first ongoing project, the Voluntary Teaching Project (Gönüllü Eğitim Projesi), in order to help educate children from underdeveloped neighborhoods in Ankara.

Büşra Güner, one of TDP’s general coordinators, notes that the organization welcomes all who wish to  volunteer. “Anyone who wants to make a difference in their society and environment can join, regardless of their major or faculty. Also, TDP is a volunteer-based organization, so people who study in different schools and even non-students can participate in projects. We always need more volunteers to reach more people who need our attention.”

If you want to be part of the solution, you can contact tdp@bilkent.edu.tr.