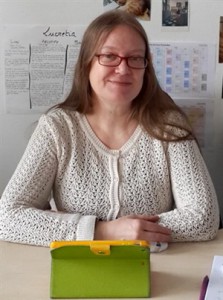 It’s really hard to answer the question of what book influenced me most; nearly all the books I read influenced me, especially novels. But one book I read when I was a teenager affected me a lot. This was “Memoirs of a Dutiful Daughter” by Simone de Beauvoir, the first of four volumes of an autobiography. It was about the period from her childhood up to her university years. She was from a bourgeois family, not poor, but not rich either. Her parents encouraged her to study philosophy, so in case she didn’t marry well she would be able to earn some money as a high school teacher. Thus, she didn’t have that many obstacles put in her way. But instead of just wanting to go to regular schools where young girls studied to become schoolteachers, she went to university in Paris and studied for the agrégation (a diploma you have to take if you want to teach in France). And this is very competitive; in philosophy, you have to be familiar with the details of a lot of books, and Beauvoir passed first time around, coming in second in her year; the student who came in first was Jean-Paul Sartre, who would become her lifelong partner.

But he was entering the agrégation for the second time; he’d failed the first time, so her achievement was greater in a way. And I found that very inspiring—the way in which she did philosophy. She wanted to do it very well, and she did it extremely well. She also wanted to become famous as a novelist, philosopher and political writer. And what I didn’t understand at the time I was reading this, when I was 14, was the sadness she had to deal with, because she was Sartre’s partner and she always had to put him first, but he never really returned the favor; he was always putting himself first. And that must have been really hard. I think she experienced other pressures as well, but I didn’t pick up any of that. What I did understand was that this was a woman, a writer and a philosopher, and she really worked hard for what she achieved, and she got it because she wanted it and because she loved what she was doing. I found this very inspirational. 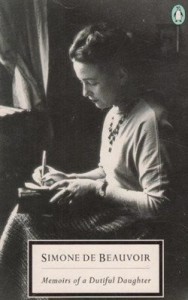 And that brings me to another book, which is actually related to the first one. The second book is a novel—I’m sure you read it when you were a little girl—it’s called “Little Women.” The book is about four sisters during the US Civil War. They live on the East Coast and are trying to make ends meet; they’re working, growing up. Jo, the second sister, wants to become a writer, and writes whenever she has time, in between helping at home and holding a full-time job as companion to a cranky old lady. Whenever she has a minute, she goes up to the attic and writes stories. Eventually, she gets some published. Her friend (and later husband) Professor Bhaer reads her stories and tells her, “They’re really good stories, but very sensationalistic. You can do better.” She takes this to heart instead of becoming discouraged and giving up, and becomes a successful novelist, writing books of good quality. I found this extremely inspirational. Incidentally, “Little Women” was also Simone de Beauvoir’s favorite book when she was a little girl. And I’m pretty sure it’s the favorite book of any little girl aspiring to become a writer.