The Guys We Think We Know: The Bilkent Judges

17 March 2014 Comments Off on The Guys We Think We Know: The Bilkent Judges

We see them around campus with their jackets, we hear about them from our friends, but do we really know the biggest club at Bilkent? Yes, it can be said that the school’s American football team, the Judges, are the biggest club: they have 62 members. Or, in their words, 62 brothers.

We interviewed the Judges’ coach, Oğuz Özen, about the team and their performance this season. You may be surprised by what you read!

B.N.: Can you give us some background about the Judges? 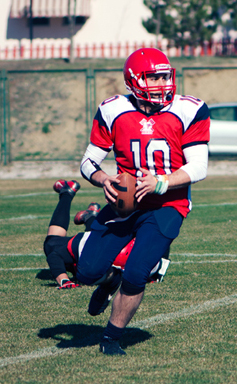 O.Ö.: The Judges were formed in 1999 as the first American football team in Turkey. We’ve been in two semifinals, and we’re in the Turkish Super league right now. The coaches are also from Bilkent. Former Judges players become coaches, and our alumni also support us. We try to be more than a team. We always get together, have fun together and eat together. We also do community service projects. For instance, we had an exhibition game with orphaned children. In addition, we support other Bilkent teams.

As for our standing in the league, we’re in the super league and are playing our group games right now. We’re in a group with Atılım, İTÜ and Akdeniz universities. We’ve beaten Atılım and lost to İTÜ. We’ll have our last game with Akdeniz on April 12, and we hope all Bilkenters will come and cheer us on.

O.Ö.: Actually we don’t think that Bilkent is expecting anything from us. But as we get better known, expectations will rise. During May Fest this year, we’ll have some exhibition games, hopefully on the main grass field. Everybody can come and watch. People can come to our practices, too—we welcome their support.

B.N.: How do you recruit your players?

O.Ö.: We have tryouts at the beginning of each term, and sometimes at other times as well. Approximately 150 people try out, but only 10 are selected.

B.N.: What’s your ranking in the university league?

B.N.: In what areas does the team need to improve?

O.Ö.: Mainly, we need to work harder. We practice with a minimum of 30 players, but we need the whole team to be there. Also, we have many new players each year. This is actually a difficulty for American football in Turkey in general. Unfortunately, the sport is learned at the university level, and when we recruit new players, we need to teach them the game. At the game level, it would be nice if we could improve our offense.

B.N.: Is there anything else you want the Bilkent community to know?

O.Ö.: Please remember that my players are your team. Come and see us practice, come to our games, and see how hard the Judges work to uphold the Bilkent name.

We thank Coach Özen and wish the Judges good luck in their matchup against Akdeniz University on April 4. All Bilkenters are invited to come to the game, which will take place on the Main Campus football field.

To support our team via social media: https://www.facebook.com/BilkentJudges