The Inadequacy of Words

30 March 2021 Comments Off on The Inadequacy of Words 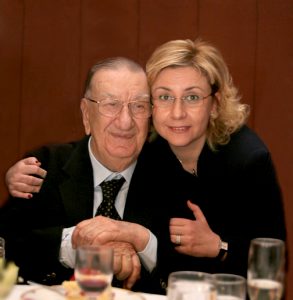 Recollections of Professor İhsan Doğramacı, set down on paper by Oya Cangüloğlu, Board of Trustees Office Manager, in 2012

We have all experienced this, finding our own words inadequate. For me, “my Professor” was an example. He used to say, “When the heart is full, the tongue falls silent.” My feelings are alive. They choose my words.

My logic is on a temporary leave of absence. I entrust myself to my feelings; I speak from my heart. What I am trying to say is as new to me as it is to you. What is certain is my sincerity, my desire and my genuineness. If you will allow me to, I would like to reach into your hearts.

I was a young girl when I met my Professor. A young girl just beginning to work. I knew nothing, neither about the job nor about life itself. My Professor was the one in charge. He was a medical doctor. He was an administrator. He was a teacher. He was a guide. I was just a girl, confused, excited, curious about what she was learning. He knew how things should be done. An aristocrat who was not estranged from his people. I learned the right ways of doing things. He was humane. He could sense hypocrisy. He observed. He perceived things quickly. He remarked on my sincerity. He was respectful of people’s rights. He would not take away someone’s rightful due. I learned about justice; it made my honesty more valuable. His foresight was acute; his vision was wide. He would teach you, broadening your vision. I thrived in his presence; I grew up.

He left his position at the Council of Higher Education. I followed him. A new university was being established. I saw the passion in those experienced hands, seeking perfection. The importance placed on education moved me. Bilkent University was founded in its library building. Books, education, university, the future, hopes, worries, joy – all of those together. This juxtaposition of the library and the university has always been meaningful to me. I smile when I think about it. A world-class university was established, and with it, our pride has grown.

Our great leader Atatürk said, “A nation devoid of art has lost one of its vital lifelines.” He added that people can find success by working hard but cannot become artists in the same way. In my Professor, I saw respect for art and for the artist, and I experienced that – sometimes at a piano recital, sometimes at a violin concert, sometimes at an exhibition, sometimes in a poem, sometimes in a narration. He showed me how to overcome shallowness through art. The respect I had for hard work extended to include respect for art. A world-class music faculty was established. A magnificent concert hall was built. I grew up in the midst of art.

Hardworking individuals should be supported. Success should be rewarded. Projects should be pioneered. My Professor pursued innovations with never-ending energy. He supported the beautiful and the useful.

He taught us to be appreciative because he knew how to show appreciation, just as he knew how to provide support. My Professor often declared that in order to grow as a person, we must never let go of two qualities: conscience and compassion. We should not take anyone’s rightful due; we should not be unscrupulous. We must not forget about compassion. We should choose to be oppressed rather than to be cruel. My Professor parted from everyone who worked with him with a handshake. I learned to forgive, and to overcome petty resentments, by his example.

Our country is part of a world that’s getting smaller. It’s impossible to think of us as being separate from the rest of the world’s people, or of those people as being separate from us. But what does this mean? I saw it. I lived it. In the milieu I entered at the side of my Professor, I watched and got to know people who shaped the world with their art, their politics and their leadership. My Professor brought the world to me, as he did to many people. I got to know people with their weaknesses and their hopes. And as I got to know people, my sorrow, as well as my hope, grew. We all come and go through this world. The longer we live, the more people we can lend an ear to. More sorrow, more happiness…

My Professor always understood life. Even as his body began to limit his movements, his mind and soul never quit the marathon. What does it mean to live as if you will never die, and what does it mean to be mindful that you might die tomorrow? I am a living witness to that. I learned it through his living it.

He had a world beyond the visible – a world not everyone could access. You needed permission to listen to the stories of that world and to see its landscapes. I am happy. From time to time I was a guest in that world. I saw someone there. I loved that person again, completely, with everything he was. They say absolute power corrupts. I saw that my Professor realized this. I observed how to be strong while being modest. I learned to listen without speaking, to solve issues without complicating them, to forgive without humiliating.

Two years have gone by since we lost our Professor. I still work in the same office. Almost every day I remember him with respect, with yearning, with a smile, and recognize over and over again how unique and one-of-a-kind his personality was. I miss his wisdom.

This is one of those moments when you come up short of words. I am at a loss as to how to express myself. May God rest his soul.