04 November 2019 Comments Off on The International Chronicles 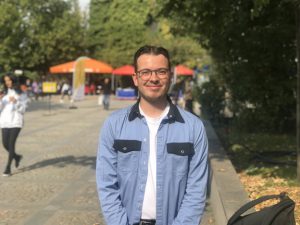 The people. I learned this during the very first night of my arrival. I was taking the bus from the airport to AŞTİ, and a woman asked me where I was coming from. I told her that I was from Germany and was coming to Ankara for an exchange semester. The woman turned out to have been born and raised in Turkey but a German citizen for 30 years, and was coming to Ankara to visit her sister. After we both got off at AŞTİ, she and her sister drove me to Bilkent. They even helped me with translation at the campus entrance and in the dormitory as if it were the most normal thing in the world – even though actually it was 4 a.m., and we barely knew each other. This would never have happened in Germany.

In Germany, there’s a large diaspora of over three million Turks. Many of them came as migrants to help rebuild our country in the 1960s. Today, they’ve been living there for two or three generations and have become an integral part of our society.

The Marmara Cafeteria. To be honest, this is the first university where I’ve actually liked the cafeteria food. Of course, I’ll also miss all the amazing people that I’ve gotten to know during these four months.

Bilka. It doesn’t matter when you go there – you’ll always find some nice people to hang out with and talk to.

If I had to choose my favorite food, I’d go for irmik helvası. This might be one of the best desserts I’ve ever tried; I can’t get enough of it.

My goal has always been to become the spokesperson of a company or an institution. In ten years, I may not be a spokesperson yet, but I do expect to be working in a public relations department – hopefully for a company that produces renewable energy.

I went paragliding a couple of days ago. The challenge for me was to trust a person I’d never met before to bring me back to the ground safely.

What places have you visited in Turkey, and which one is your favorite?

Unfortunately, thus far I haven’t visited a lot of places in Turkey. I’ve seen Ankara, of course, as well as Beypazarı and Fethiye, which I liked the most because of its unique landscape. But obviously I plan on visiting İstanbul and İzmir too.

For some reason, I’m quite good at guessing and remembering numbers. Apart from that, I’m a good and passionate writer – but to people who know me, this might not come as a surprise.

People ask me all the time why I chose to come to Turkey. I’m glad you didn’t ask me that too (haha)!