20 April 2021 Comments Off on The International Chronicles 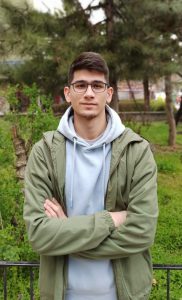 The best thing about Turkey is the cuisine. It’s enormous.

I think the thing that’s the most similar is the people. People are very friendly and kind in both countries.

I believe I won’t miss Bilkent or Turkey. However, I think I’ll miss the friends I made over the course of four years.

My favorite place on campus is Skatepark and the nearest parking lot. It’s mostly empty, and I like to skate during my free time.

İskender kebap has a special place among my favorite dishes. It’s the first food I tried after coming to Turkey, and to me it’s the best one by far.

I think I’ll be doing postdoctoral fellowship studies somewhere in the US, hopefully. However, if things get turned upside down, I might stop pursuing a career in academics and start playing video games for living (lol).

I won’t call it the hardest, because I think I’ve never had any hard things to handle; however, the process of renting a house and moving into it was exhausting.

I don’t remember the exact cities, but I’ve visited the Cappadocia region. I’m not much of a travel person if there’s no one to gear me up for it. So, I think Cappadocia is my favorite region in Turkey by far.

I think the most frequent questions I hear from a lot of my friends are “What’s wrong with Bilkent? Why are your professors so strict? Why Bilkent can’t function like other universities?” And my reply is “Because we’re the best university in Turkey, and we need discipline, which will help us to be an even better university and climb up the rankings.” And then I wake up, frightened.