11 December 2017 Comments Off on The International Chronicles 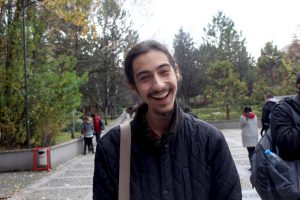 I absolutely adore the weather. It’s a close call between İskender kebab and the weather, but I guess the cloudy days have to win.

Oh, yes! For some reason our officials can handle anything but traffic. I mean, come on, how difficult could some city planning be?

The people are lovely and very hospitable. The food is amazing and the weather is absolutely gorgeous – at least in my morbid opinion. I can tell you what I won’t miss, though, and that’s the occasional loss of privacy. Too much kindness can sometimes be interpreted as being nosy. For the record, though, I’ve been known as introverted, so I guess that’s entirely on me.

There’s a Coffee Break on the third floor of the library. Apart from the fact that it’s very remote and almost never crowded, it has the comfiest chairs in the whole of Bilkent, and perhaps even Ankara.

İskender. Not even a contest. The thing I like most about Turkish culture is people’s acceptance and love of all foreigners. You can’t feel more at home in too many other countries.

My best-case scenario is working in a dark lab in some remote university’s basement, which, to be honest, I wouldn’t even mind.

Well, there’s a story worth telling. I’m half-Turkish, half-Iranian. When I first came to Turkey I learned that I had a whole branch of family that I’d had no idea even existed. However, due to some bureaucratic complications I went without a visa or any kind of permit for over four years. Being an illegal immigrant in my very own fatherland was a most amusing irony. I sometimes miss the utter thrill that seeing a man in uniform gave me back then out of fear of deportation. Oh, those were the days….

Only the trite “tourist choices,” I’m afraid. İstanbul, Ankara, Bursa, Eskişehir, and the northern coast. My favorite by far was a northern village whose name I unfortunately can’t remember. I had the most amazing pide and tea on a cold, damp afternoon there.

I make fantastic pizza dough – not the sauce or anything else, but no one beats my dough. I’ve also been accused of being a good public speaker, which I find ludicrous.

“Do they speak English?” The answer to which is “define English.” There are many interesting comments about Bilkent, but I’m not entirely sure if they’re material for printing.

If you could master any skill, which one would you choose, and why?

Making good pizza sauce. My dough is nothing short of perfection, and it deserves something more than the bland, watery, sickly pink mess I call a sauce.