05 March 2018 Comments Off on The International Chronicles 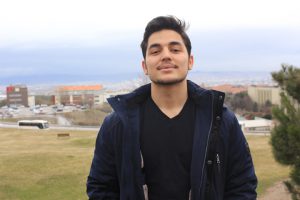 Turkey and the Turkish people have many qualities that I like and respect, but what makes Turkey unique is the spirit and passion of its citizens about their country and everything related to it. During national holidays, Turkish flags are present in the streets. When a Turkish football club plays against a foreign club, all Turkish people support it, even when they support a different team in local competition. Although people here may have different opinions about the government, they’re united when it comes to supporting the country. In many other countries, this spirit is not as strong as it is in Turkey.

Quite a few. People are open and welcoming here like back home in Tajikistan. Also, the traditional values are similar, since we have the same religion.

I’ll miss the atmosphere at Bilkent, as it’s a mini-community in itself. I’ll also miss Turkish cuisine.

My favorite place on campus is Bilka. It’s a nice place to spend the evening after a hard day.

As a diplomat from Tajikistan on a foreign mission.

It was hard for me to learn Turkish properly. Even after seven years in Ankara, I still haven’t mastered it.

I’ve visited quite a few, as far west as İstanbul and İzmir, and as far east as Şanlıurfa. My favorite place is Bodrum, as the “marble city” is beautiful, has an enormous castle, and never sleeps.

I can play the piano, but I haven’t practiced in a very long time.

“Is life in Turkey similar to the way it appears in their TV shows?” I’ve heard this question many times back in Tajikistan, as Turkish TV shows are very popular there.

If you could master any skill, which one would you choose, and why?

I want to master writing with my left hand, since I’m right-handed.  I want to learn this skill because it looks cool and I could switch the pen to the other hand when I got tired while writing something.