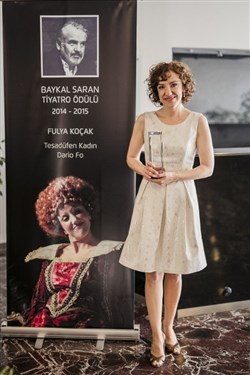 This year’s Baykal Saran Actress of the Year award went to Ankara State Theater artist Fulya Koçak (THEA/’98) for her role in “Tesadüfen Kadın Elizabeth.” The play is a Turkish translation of “Elizabeth: Almost by Chance a Woman” (Coppia Aperta, Quasi Spalancata) by Italian playwright Dario Fo, which was staged at the Ankara Art Theater under the direction of Ferdi Değirmencioğlu.

The award, which was given for the ninth time this year, is named after State Theater artist and director Baykal Saran, who passed away in 2006. Ms. Koçak was presented the award by former President of Turkey Ahmet Necdet Sezer at a ceremony held at Akün Sahnesi.

Following her graduation from Bilkent’s Department of Theater in 1998, Ms. Koçak has worked at the Ankara Art Theater (1998-2002), the Erzurum State Theater (2002-2010) and the Ankara State Theater (2010-present). Her previous awards include the 2013 Actress of the Year award from the Theater Critics’ Association; a 2011 Sadri Alışı Anatolian Theater award as the “Most Successful Actress of the Year”; and the 2011 Best Actress award from the Ankara Arts Board.