02 April 2018 Comments Off on THM at Travelexpo Ankara 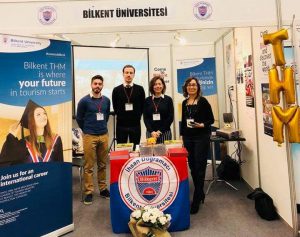 Last month, the Bilkent University Department of Tourism and Hotel Management took part in Travelexpo Ankara 2018, an international travel and tourism fair supported by the Ministry of Culture and Tourism. This was the third time the event has been held; it took place March 22–25 at the Congresium Ankara International Convention and Exhibition Center.

Eight countries, 42 cities, and 220 participants were involved in this year’s fair. As part of the first gastronomy conference to be held during the expo, a 515-kilogram baklava baked on a single tray became a Guinness record holder in the “Largest Baklava in the World” category.

Bilkent THM was represented at Travelexpo in a number of ways. Başak Özyurt, a 2015 graduate of the department, served on the organizing committee. The department also had a stand at the event, where it contributed to the promotion of Ankara. In addition, the acting chair of the department, Asst. Prof. Eda Gürel, gave a presentation on “The Profiles and Motivations of Museum Visitors in Ankara,” in line with the “cultural tourism” theme of this year’s expo.