On March 9, the Department of Tourism and Hotel Management  held an event titled “Women in Positions of Power” to celebrate International Women’s Day. The event, which took place online via Zoom, hosted three female graduates of the department, who spoke about their successful careers in the tourism industry. 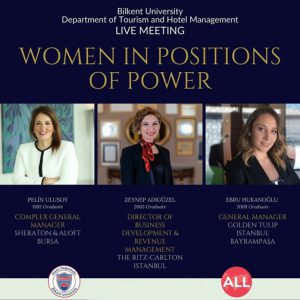 Since the department is a member of the Alliance by Institut Paul Bocuse – a global network of schools specializing in the culinary arts and the hospitality industry – the event attracted an international audience that included students, graduates and faculty members of THM and other Alliance schools from seven countries: Finland, France, Mexico, the UAE, the UK and the US as well as Turkey.

During the event, the three featured speakers discussed their careers and the ways in which their Bilkent education has helped them to advance.

The first to speak was Pelin Ulusoy, a 1992 graduate of the department whose work experience abroad has included stints in New York and Bangkok; she is currently complex general manager for Sheraton and Aloft Bursa. In her remarks, Ms. Ulusoy stressed the importance of working in various departments and at various properties during the process of building a career in the industry, saying that Bilkent had provided her with the requisite knowledge and background on which to base this kind of wide-ranging experience.

The next presentation was given by 2003 THM graduate Zeynep Adıgüzel, director of Business Development and Revenue Management at the Ritz Carlton İstanbul. Ms. Adıgüzel noted that the knowledge of computerized programs used in the hotel industry that she had gained at Bilkent helped her in obtaining a position at the Ritz Carlton İstanbul immediately after graduation.

The final speaker, Ebru Hukanoğlu, a 2009 THM graduate, is general manager of the Golden Tulip İstanbul Bayrampaşa. Sharing the fact that she had received her first job offer from the Çırağan Kempinski Hotel, Ms. Hukanoğlu said that being taught by both academics and professionals with international backgrounds while she was studying in the department gave her a definite advantage.

Closing with words of advice to current students, the three graduates agreed that they have felt fortunate to be able to draw upon the knowledge they acquired at THM on the job every day, and encouraged their listeners to work hard at school, just as they will need to later on in the business world, in order to do their best.