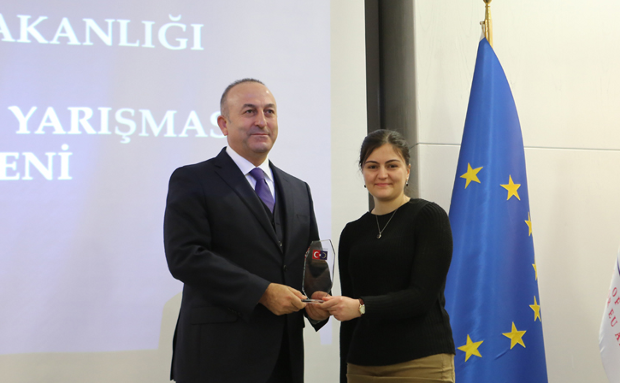 The contest’s purpose is to motivate the training of translators in EU languages and also to raise the awareness of students studying in the translation and interpretation departments of Turkish universities regarding Turkey’s EU accession process. Held on December 7 in Istanbul, the competition included the translation of a text from one of the three working languages of the European Union (English, French and German) into Turkish.

At the award ceremony, which took place at the SGEUA headquarters in Ankara, Minister for EU Affairs and Chief Negotiator Mevlüt Çavuşoğlu presented plaques to the first three students in each language category. The winners will have the chance to visit the European Commission, the European Council and the European Parliament in Brussels.

The Young Translators Competition, held for the first time in 2010, aims to increase students’ awareness about Turkey’s EU candidacy process and to help fill the demand for the translators that will be needed during EU harmonization and the translation of the Acquis Communautaire. In the 2010 competition, two Bilkent students, Anıl Dursun and Nihal Zemheri, won first and second places in French and English, respectively. Ali Can Karamahmut was second in French in 2011; in 2012, Mefail Kanbulat took first and Salih Uzuner third place in French, with Melike Özen achieving second in English.